The exhibition “Art Meets History: Technologies of the Spirit” challenges the idea of a singular New Mexico story.

Open at 516 ARTS, the exhibition marks a second iteration of the show that opened with “Many Worlds Are Born,” showcasing that constellation of community and history expressed through art.

Many of us think of technology as being limited to cell phones, algorithms and computers. The show argues that technology can be something as simple as ritual or self-care.

“It’s similar to the last show,” said co-curator Alicia Inez Guzmán, “to look at New Mexico’s many histories and pair them side by side.”

Artist Josh T. Franco, an art historian and archivist for the Smithsonian Institution, zeroed in on the legacy of Georgia O’Keeffe, even recording a lecture given at the Santa Fe museum. He had already explored the legacy of the artist Donald Judd in southwest Texas. He also referenced Ralph Looney’s 1962 black and white photograph of O’Keeffe holding a stone.

His piece “On Art History (for Georgia O’Keeffe)” depicts a cloud from the artist’s famous 1960s series using acrylic, watercolor and projector slides.

“He was saying some people don’t like it and the audience responds with uncomfortable laughter,” Guzmán said.

The installation features clothing from Franco as well as one of O’Keeffe’s suits.

Marcus Zuniga created a “chuparosa” (hummingbird) from light and mirrors. The artist has a keen interest in cosmology.

The original installation in Mimbres honors his great-great grandmother.

“She died at noon,” he said in a telephone interview from Pasadena, California. “We set it up at the place of her birth, at the time of her death to think about her life as a contribution to the cultural landscape of New Mexico.”

Hexagon-shaped mirrors and video projections reflect and layer in a model of the cosmos. The hexagons could form the apparatus on space telescopes.

“Hexagons are one of the most efficient geometrics to measure space with,” Zuniga said, explaining that the James Webb Space Telescope features that shape to measure infrared astronomy.

Zuniga grew up in Hatch.

“I was doing all this genealogy research,” he said. “I have this lineage, like a lot of people in rural New Mexico, that goes back 100 years.”

He traced his family back to the Hispanics who fled Santa Fe following the 1680 Pueblo Revolt. His parents were teachers.

He also wanted to honor his grandmother and her legacy.

“I named the project ‘chuparosa’ for her,” he said. “She has the wonderful ability for hummingbirds that fly around her face in the morning.”

“I like it here because it’s close to Cal Tech and the Jet Propulsion Lab,” he said.

To develop the projects, many of the artists researched the Albuquerque Museum’s photography archives and participated in 516’s educational program Artist Lab: Art Meets History in New Mexico. Co-curated by Ric Kasini Kadour and Guzmán, a series of public conversations and activities accompanies the exhibition.

Tue Jul 5 , 2022
When it comes to making powerful computer chips, Advanced Micro Devices (AMD -3.66%) is best-in-class. The company is an incredibly versatile producer, serving wide-ranging purposes that include gaming, the data center, and even virtual reality applications.  Chips, which are commercially known as semiconductors, have become one of the most important […] 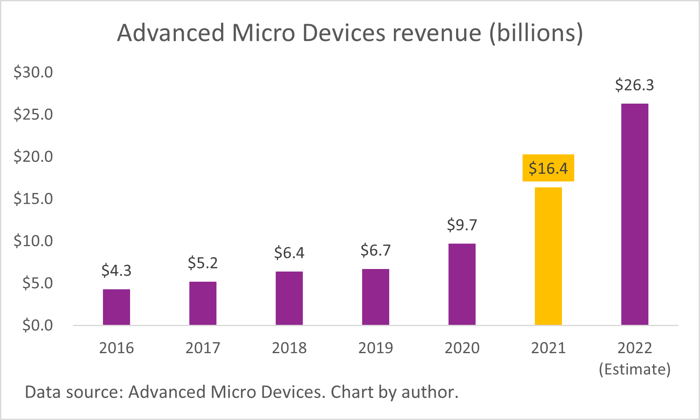